Incredible Florence is the first immersive exhibition produced by Crossmedia Group: a multimedia production that in 60 minutes manages to tell 2000 years of the history of the Tuscan capital city.

From the foundation of the Roman municipium to its decline in the Early Middle Ages, from the bloody city of the Tower Houses to the bloom of a gold age between the early decades of the XIV century and the end of the XVI century, that mythical age when Western History changed forever on the banks of the river Arno. From the national unification process that introduced the urbanistic concepts of the bourgeois modernity, to the city crossed by the great twentieth century conflicts, the post-war reconstruction, the 1966 flood, and the city of fashion.

The digital narration is developed for one hour, in an artificial context where the public and only the public is asked to decode the relationship established between senses and intellect. Images and music reconfigure the space, creating a tool that crosses history and that is simultaneously inside and outside of time. 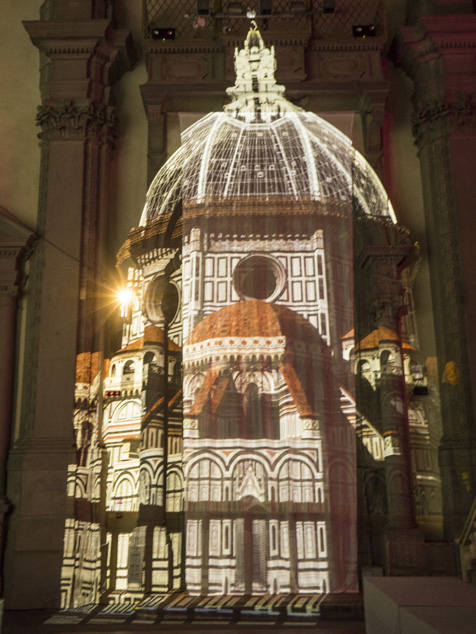 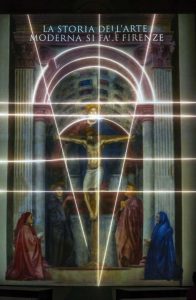 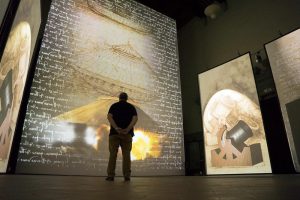 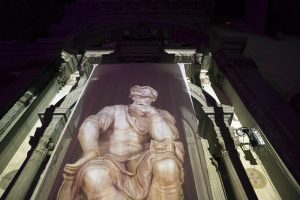 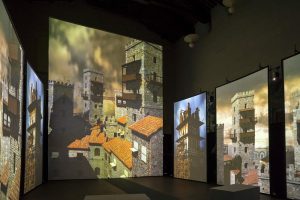 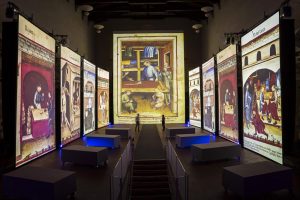 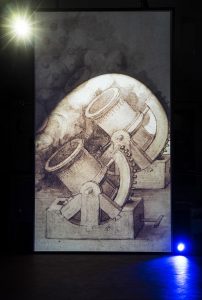 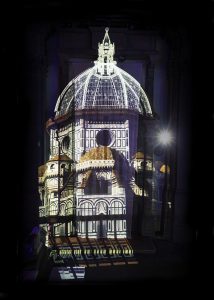 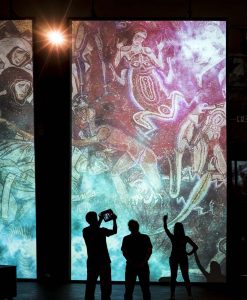 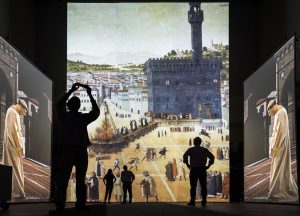 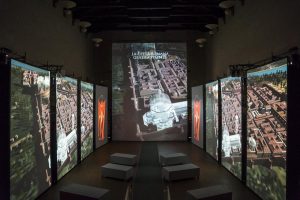 The city of Florence was founded in 59 BC by the Romans, under the name of Florentia. The settlement was destined to the army veteran soldiers and it followed the classic design expected of the Roman agrimensors: quadrangular and divided by seven streets on the North-South axis, intersected orthogonally by five streets on the East-West Axis. The ancient Romans built the banks of the river Arno and of its tributary Mugnone, picking a site that would turn out convenient for transportation: the city was on the Via Consolare Cassia Nova, in a strategically relevant spot that allowed the presidium of the Arno valley. In 123 AD the first real bridge on the Arno was built. In the II century the aqueduct, the amphitheatre and the thermal baths were also built. There even was a fluvial port facilitating the trade with Pisa. The city prospered until the end of the Roman age, when the Barbarian Invasions decimated its population and the city experienced a drastic demographic decline, that would not be restored before 1000 AD.

Starting from the late Middle Ages, Florence started gaining back its economic relevance and in 1115 it became a free commune. Middle Age Florence elected its own institutions and ruled itself autonomously.

The XIII century saw the great conflict between the opposite factions of Guelphs and Ghibellines; for decades Florence was the scene of many civil wars: in the end, the Ghibelline families were defeated and exiled. Soon enough, the Guelphs themselves split into two factions and started fighting. Among the exiles there was Dante Alighieri, the famous poet and father of the Italian language, who kept seeing himself as a Florentine in captivity during his whole exile. On the other hand, this was also a time of great prosperity: Florence became increasingly richer and populated thanks to the strong growth of commerce that also brought a new social group ruling the life of the city, merchants, that soon became the new Florentine oligarchy.

In 1285 Florence struck for the first time a new coin, the Gold Florin, that became the international anchor currency for almost two centuries. In the XIV century the wealth of Florence peaked with the Florentine banks lending money at a high interest rate to the popes in Avignon and the European sovereigns.

But it was the next century that consecrated Florence in the world history when its financial floridity turned into artistic fervour and Renaissance made its name immortal. For two centuries painters, sculptors, architects, philosophers, men of letters and science competed in changing the face of the city, linking inextricably their name to Florence. The beginning of the XVII century marked a phase of relative obscuration that ended in the XIX century when a new vitality hit the Florentine society: artists and intellectuals from all over Europe rediscovered the city, looking for the Renaissance art and culture.

Since then, this cosmopolitan soul has never abandoned the city.

All this is Incredible Florence.